I am very surprised that I have had this blog as long as I have and have never once talked about my stuffed chicken breast. If I have a signature dish...this is it. It is likely the dinner recipe I have made the most often.

When I was younger and just getting into cooking, I usually followed recipes. I was still me, so I often changed a few things here and there and quickly switched to using my hands and eyes to measure more then I did measuring cups and spoons. But I didn't often make up my own things to cook from scratch. I still remember one of the first things I ever made was a weird chicken/cream of mushroom soup/rice glob that turned into a salty pile of not-too-goodness. But I think I was in middle school, so give a girl points for trying. 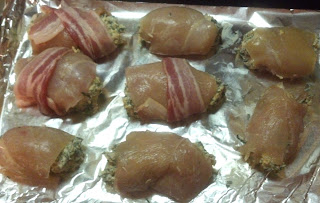 To this day I will usually look up a few recipes that are similar to what I what to cook to get some tips/ideas (such as using tomato paste in my venison stew), and then cobble something together. Years ago, I can't remember exactly when but I think I was in high school, I had a craving for dinner. I searched for a bunch of recipes on line but nothing I was finding had exactly what I wanted. As I was searching I realized how stupid it was to keep trying to find the holy grail of a recipe when I pretty much had the entire thing ready in my head.

I knew I wanted to have chicken breast, and I wanted it stuffed with a creamy, cheesy, spinachy, bacony filling and then baked. That was it. So I mixed together cream cheese, sour cream, pieces of cooked bacon, chopped up spinach, shredded cheddar and some seasoning, rolled some chicken around it and cooked it. It was delicious. 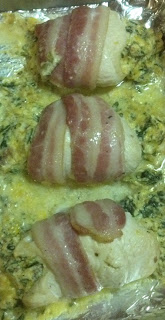 I said this is the dinner recipe I have made the most often, but that is bending the truth a little bit. Since I don't have a recipe and don't like having strict cooking rules to follow, I never really make it exactly the same. Sometimes I will caramelize onions and garlic and throw that in the stuffing. If I am feeling fancy and remember to buy enough bacon, I'll wrap each breast in a slice. I've done a mixture of mozzarella and parmesan (though I prefer the cheddar). I even made this in Shanghai once, but with some sort of weird ham that I found since I had trouble A) getting good bacon and B) cooking bacon well on a hotplate with a wok.

If anyone is looking to try and make this (or something similar) I would just recommend buying the "thinly sliced" chicken breast or similar at the store. That, or make sure you have a meat hammer. I spent many a time making this recipe beating chicken breasts into pulp trying to get them semi-flat and roll-able. The thin slice just makes it so much easier.

I always seem to have two things happen when I make this recipe: I wish I thought to make enough for leftovers since I love it and don't make it that often, and I always make more filling than I have chicken for. As for the first, this time I think I went overboard and will be eating stuffed chicken for a week. No matter. Its tasty. As for the second, that really isn't an issue. Just take any leftover filling you have and heat it up in the microwave for a delicious creamy/bacon/cheese/spinach dip. Have it on some crackers or bread. Delicious.
Posted by Stephanie/Sproffee at 1:16 pm