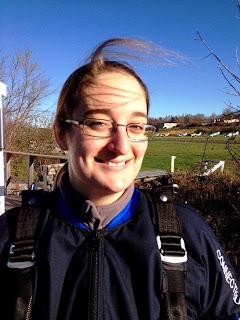 I've wanted to go sky diving for many years. On my 18th birthday, my parents told me they would pay for me to go sky diving as my birthday present. But at the time I was overweight and I only ended up getting heavier from that point. When I started trying to get in shape last January, my mother said to me "Maybe you can go sky diving when you are done?" (or something along the lines), but I just scoffed at her and said, "I don't think I'm going to be able to lose 70 pounds."

Welp, apparently I didn't give myself enough credit. I'm 65lbs down from that point and still working. So when a Groupon came up for sky diving in Ellington, CT, I forwarded it to my mom and she immediately bought it. After a one week delay due to Sandy (and whats a one week delay when I have been waiting to go for 8 years now?) I got to jump this morning.

I didn't tell too many people that I was doing it before I jumped just in case it got cancelled or something happened (not sure what that something was....chickening out maybe?). I was also trying not to think about the jump too much, I think to avoid psyching myself out. The few people I did tell wished me luck and I honestly had to remember I was going. I think I only admitted to myself I was actually, truly, for reals going to jump once I started putting on the jumpsuit.
﻿﻿﻿﻿﻿﻿
My rentals and I arrived at Ellington around 7:40 AM. I signed a bunch of paperwork saying I promised not to sue if I got all broken or died. I put on some extra layers due to the cold. I got my jumpsuit and harness on. My tandem jump partner, Lindsey (not sure how she spells it), went over the basics with me, what would happen in the plane and what positions I would need to be in for each stage of the fall.﻿﻿﻿﻿﻿﻿﻿﻿﻿﻿﻿﻿﻿﻿﻿﻿﻿﻿﻿﻿﻿﻿﻿﻿﻿﻿﻿﻿﻿﻿﻿﻿﻿﻿﻿﻿﻿
﻿
I practiced my positions while my mother laughed and took pictures. Then we were getting loaded up into the plane. The door that they opened and closed for us to jump through was clear and I had a good seat to watch out while we took off and got to the jump height (I think Lindsey said it was about 2 miles up). While we were in the plane, Lindsey hooked the two of us together very snuggly. Lots of tightening of straps and hooking things together. She checked every connection and said them outloud as she did so (for my benefit I think). She asked a few times if I was excited and ready. I think I had done too good a job of not psyching myself out. The whole time I was still extremely mellow, so I probably seemed almost bored. I promised her I was excited and looking forward to it. I put on my leather cap and pulled my goggles over my glasses (which was exciting cuz I was worried I wouldn't get to wear them and it would just be a long blurry fall). The couple in front of me that were also jumping gave each other a quick kiss (which was made extra adorable and a little funny since they were both strapped to other people) and then it was time for us to jump out.
﻿﻿ We were the third pair to go. We crouched and scooted to the exit, facing the front of the plane with the door on our left. We rocked once, twice and then we were falling out of the plane. I pushed my hips forward and head back (as I was instructed) so that we would get into the right position for falling. The first few seconds were rather surreal. My face was pointed towards the earth and the air was just rushing past my body so fast and strong that I couldn't really move or look around. It honestly didn't even feel like I was falling at that point. It was just like I was watching the Earth get closer, while looking downward in a strong wind. Lindsey gave me the double tap on the shoulders so I knew I could spread my arms out and enjoy the fall. My goggles shifted slightly and for half a second I thought I was going to lose my glasses a mile above the ground. After a short time (at least it felt short), Lindsey pulled the parachute and things immediately slowed and calmed down. She unhooked something else, and I dropped away from her a bit and suddenly I was falling vertically. From that point on it felt pretty much like parasailing. Quiet, calm, breezy and beautiful. We floated down while I tried to pop my ears and Lindsey pointed out different cities. "There's Springfield," she said, then pulled us leftward, "And there's Hartford." I was pleasantly surprised at how long we got to float around, I thought it was going to be over much faster.

She asked if I got nauseus easily. When I said no she handed me the straps that control the parachute and guided me to set us into a spin, first left and then right. That was a lot of fun. I asked her how the directional straps worked and she explained how they create drag. Looking back now (a whole few hours later), I think thats pretty typical for me. There I was, sky diving for the first time, falling towards the ground, and I take a moment to ask for a lesson on parachute mechanics. Ah well, I like learning and understanding. 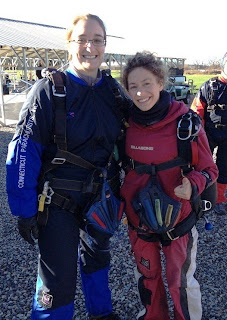 Lindsey had me practice the landing position a few times the closer we got to the ground and scoot my butt further back into the straps. Once I could make out the shapes of my parents and Tony (a family friend and coworker who lives near the airport and came to watch me jump), I waved. Then the ground was coming up fast. I pulled up my knees, then stretched out my legs. We landed on our rears and slide forward a bit before my heel caught the ground and brought us to a rather ungraceful stop and made Lindsey whack me ever so slightly in the back. She unhooked us, I thanked her for the ride and she had to go run off for another jump.

The whole experience was over pretty quickly and I still feel slightly detached from the whole experience. I had a really great time and I would absolutely love to go again. There's one thing I can cross off my bucket list.

Posted by Stephanie/Sproffee at 2:29 pm