There is a part of me that doesn't really "get" networking. As a person that can sometimes be honest and blunt to a fault, networking almost feels like lying to me. Pretending to like someone more then you do, acting like you are friends so that you can get favors from one other, or changing personality from event to event to be the person you think people want you to be. I suppose that is a rather cynical way of looking at it, but I want to spend time with people I genuinely like that genuinely like me. All that aside, I can definitely see the pluses of networking and have reaped the benefits of it personally and professionally.

Improv networking is something I can get behind even more. Especially in Connecticut. The improv community in CT is still rather small and spread out, but it is growing and connecting more and more each day. One of the main reasons I (and all of Sea Tea) is excited for our new studio space is that we want it to be a hub of improv for all improvisors in Connecticut, not just us. We have a board by the door where anyone can hang up show posters or their troupe logo or notices regarding events. There's already been a mixer and I hope more troupes and individuals will soon take advantage of the space. 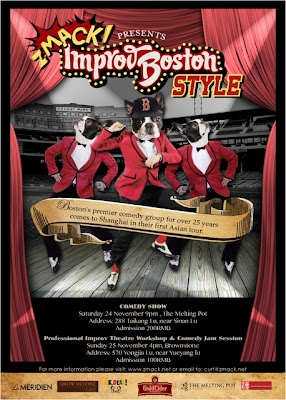 Also, on the subject of networking and improv, I rather unexpectedly ended up helping to forge some connections on a much wider scale recently. A few months back Sea Tea brought Will Luera from Improv Boston to teach a few workshops in Hartford. We were all discussing our improv backgrounds, so I mentioned how I did improv in Shanghai with Zmack and The People's Republic of Comedy. After the workshops, Will mentioned how Improv Boston was going to Japan later this year and how they were trying to find a reason to stop in China too. He asked me to put him in contact with my former troupes, so I very happily did.

Fast forward to now and its officially happening! I felt a thrill checking out Zmack's website and seeing a poster for Improv Boston's visit. They are doing a show and workshop and I helped it happen! I gave Will a few suggestions of tasty Shanghainese cuisine to eat during his visit (I miss sheng qian bao more then I want to admit) and asked him to tell me how it goes afterwards. Its very bizarre and exciting at the same time to think how I helped to connect these improv troupes from thousands of miles away....there's networking for you! I hope the show and workshop go amazingly. I just wish I could be there myself.

Tonight is the the official grand opening for the studio, so I guess I'll be doing even more improv networking. Its easier, though, when you already know pretty much everyone that's coming and we'll be talking about something I love to do!
Posted by Stephanie/Sproffee at 11:16 am