One of the most unique gigs that I have been a part of as a member of Sea Tea Improv was a gig we did for the Butler McCook house this fall as part of EnvisionFest. The Butler McCook house is a historical house in Hartford. During the Civil War, two sisters lived there: Mary & Eliza Butler. The were cousins to the somewhat well known McCook family (aka the Fighting McCooks). Fifteen members of the McCook family all enlisted in the Union army with varying assignments, successes and longevity. Mary & Eliza tried to help out in the war effort by sending packages (with things like food, newspapers, wine and in one case enough mittens for a literal boatload of men) and writing letters to their cousins. A fabulous recent find in the attic of the Butler McCook house was stacks of the letters the cousins wrote in response.

We were asked to read through the letters/books/notes/etc and put together some scenes based on these real people and their interesting lives. I think one of my favorite things about the experience was reading through everything. It really struck me how normal and human and real these people were. They got homesick and complained about flies. They fell in love and they talked about the importance of home cooked meals. They wondered about getting promoted and teased their family members. We tried to write sketches that picked some of the most interesting stories or qualities from five of the McCook cousins who were brothers (Roderick, Ed, JJ, Anson & Henry).
﻿

Vlad, Julia & I met one night to discuss casting, which stories to focus on and the structure of the performance. We decided to set it up as though Mary & Eliza were putting together a package with their cousin (also named Mary), and discussing the five brothers. At times the men would pantomime what they described, or would step forward for a flashback. We used as many quotes from the letters as possible for acuracy and also because the letters themselves were just fantastic. Casting was hilariously easy to do because the brothers oddly seemed to match up very well with the personalities of the members of Sea Tea. Since we were one dude short, I volunteered to cross-dress (AGAIN) and play the part of Roderick (aka Shed), a naval officer. Part of the reason I was slated to play Shed is because while he was serving on the USS Stars & Stripes, Eliza & Mary knit 80 pairs of mittens for the enlisted men on the ship. While we were getting an initial tour of the house to start learning about the Butlers & the McCooks, my eyes must have lit up at hearing that. Julia just looked at me and was like, "Yep...we are doing that story." I wrote the opening scene, Roderick's story & "Horse" Ed's, while Julia wrote Henry's, Anson's & JJ's (the closer).


﻿﻿As the un-official Sea Tea costumer, I was also responsible for getting us period garb. As part of the grant that was covering our performance, there was a portion just for costumes & props. I was excited to actually have a budget to work with instead of needing to scrounge into my own odd clothing reserves and Goodwill. After some research I decided to go with Boston Costume, and I don't mind at all giving them free advertising because they were extremely helpful. It took quite a few phone calls & emails to get all the details straight, but they were very patient and there is no arguing with the end result. We got a lot of compliments for our costumes. And we still had a bit of money leftover from the grant money to also get some prop civil war muskets that came in very handy during the pantomime. 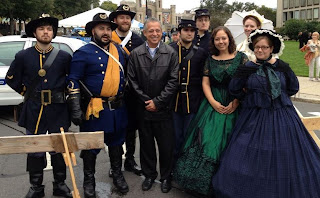 In between the three performances we did during the day we wandered around Hartford in costume. We ended up taking a ton of pictures with people. At one point we ended up running into the Mayor of Hartford (so this marks the second time I've met the Mayor, and both times I was cross-dressing and in period garb. When he saw me he said, "We must stop meeting like this!"). We also decided to ride the carosel in Bushnell Park in costume, which was a wonderful moment....until they started playing the song "Dixie" to our Union dismay.

So now we have done scripted history gigs for both the Mark Twain house and the Butler McCook house. I wonder what other landmarks in Connecticut would like some talented improvisors to bring life to their unique histories? I know I'm always looking for excuses to get my fellow troupemates to wear interesting clothes...

Posted by Stephanie/Sproffee at 5:13 pm