If you had to choose to make one of the three scarves below...which would it be?

The first is one version of the scarf the 4th incarnation of The Doctor from "Doctor Who" would wear. I've been rather "Doctor Who" obsessed recently, and though I sadly must admit I have never seen a Tom Baker episode, I feel a certain affinity towards him just from being exposed to the culture. I plan to watch his episodes someday, I promise! And the obscene length is not a deterrent for me since I tend to be a relatively fast knitter and its all straight garter stitch. 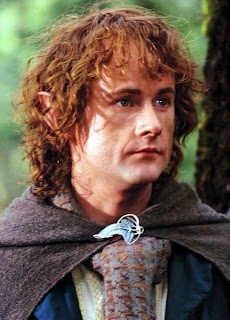 The second is Pippin's from "Lord of the Rings". Pippin was always a favorite character of mine and my LOTR obsession in high school led me to being very active on various forums, primarily one that was Billy Boyd/Pippin based. I even was sent my very own "wee scarvie", which was a tiny braid of yarn in the colors of his scarf, and made for other "loons" to recognize their own. His would probably be the least recognizable if I just wore it out in public. 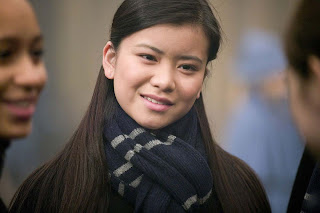 The third is a Hogwarts house scarf from "Harry Potter". The most popular version for fans to make/buy/wear is the Gryffindor house colors, but I don't think that fits for me. Thinking about it recently, I suppose I would probably be more fitting in Hufflepuff, but since Hogwarts is for school age children and I was definitely more focused on my studies at that time, I would probably make a Ravenclaw scarf. (Like the one to the right.)

(Look....the word "geeky" is in the title of this post, ok? I could talk about this stuff for hours.)

While I hope to make all of these one day, I would probably go crazy trying to make them all at once, and the likelihood of having any done by the time winter arrives if I tried would be laughable. So I decided to wash my hands of making the decision myself of which to make first and I polled my friends on facebook.

I'm not sure why, but I thought for sure that either the Hogwarts or Doctor Who scarf would win. Much to my surprise, Pippin pulled ahead and was the clear choice. The argument most people had was that Doctor Who scarves and Hogwarts scarves are to a large part overdone, but you rarely see a Pippin scarf. A good argument, I feel! 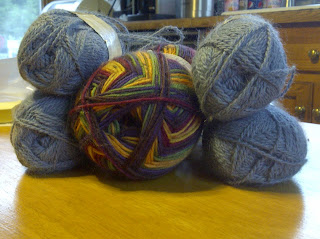 With the decision made for me, I went out this past Saturday to my LYS and started a hunt for the right yarns. To me it looks like the yarn that makes up the houndstooth pattern is a variegated yarn (rather than a bunch of different colored yarns), so my first quest was finding a variegated yarn that contained the same color scheme. I also needed defined colors and frequent changes, but not so much that I would get a checkered pattern ...I needed stripes. Then once I found that yarn I would need a background blue/gray yarn that was a similar fiber and thickness. Easy, no? Answer: no.

With help from the lovely Village Wool ladies (and after scrounging around the shop for six rotations), I finally decided on the yarn you see above. 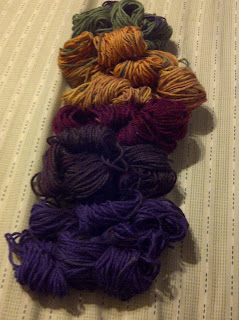 Once I got it home I realized that the color runs were probably a bit too long. It was likely I was going to end up with full repeats of the pattern in one color instead of midpattern changes. So last night I bit the bullet and began a rather long and boring process of dissecting the skein into its different colors, cutting those stretches into smaller bits, reorganizing them into a color change pattern I wanted, and then reassembling the whole shebang into a bit of a Frankenstein-esque skein. I knew from the start of this project that I wasn't going to be heartbroken if my scarf isn't a dead ringer for Pippin's, but I wanted to get as close as possible without going overboard. A couple hours of skein surgery to end up with a scarf I know I'll be a lot happier with is worth it in my eyes.

I've got a few repeats complete already on the needles and I'll keep you folks updated with my progress. I'll take a picture of it once its big enough to actually see the pattern.

Wish me luck!
Posted by Stephanie/Sproffee at 11:05 am No comments: