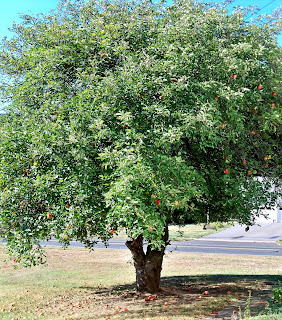 I have lived in the same house since I was four years old (minus the years I spent at college and in China). One of my favorite things about this house is the outside. There is a pretty sizable yard in which we often see some fun wildlife. And I love the two apple trees. One is in the backyard (which I used to climb, badly, when I was younger and there were three huge branches for balance), and the one in the side yard right outside my bedroom window (pictured left). Every year they produce apples but 9 years out of 10 they only get eaten by deer, the dogs, random people who ask if they can take some for their family/animals, and the lawnmower. This year the side tree actually produced some pretty decent apples and my dad gave me the challenge/assignment to bake a pie using apples from our tree.


I collected a good amount from the tree, peeled and sliced them, constantly spritzing the bowl of slices with some lemon juice to try and prevent them from turning. I had to cut out a few bad spots, but by and large the apples were lovely. I used my absolute favorite pie crust recipe, and I think this will be the pie crust recipe I use forever. I used to have such trouble with crusts but this one is wonderful. I usually add a bit of nutmeg and cinnamon just for a little extra flavor. I had a lot of fun with the crust, doing lattice work, which I think I am getting quite good at! It's so much fun to do and actually not that hard. It's weaving...with food! How cool is that?

I was sure to get a nice before and after baking picture. I brushed the crust with some egg and butter for the nice shine, then a sprinkle of sugar and cinnamon. If you are wondering what the whitish-yellow lumps are right under the surface of the lattice work, it's butter. I used a recipe one time for pie that said to put some little chunks of butter right on top under the top layer and I've done it ever since. I'm not sure what it's supposed to do, but it's just habit now. 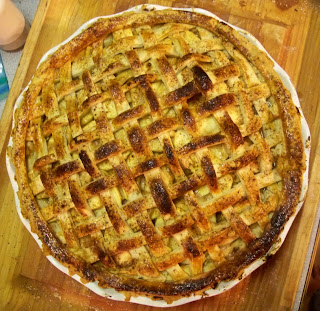 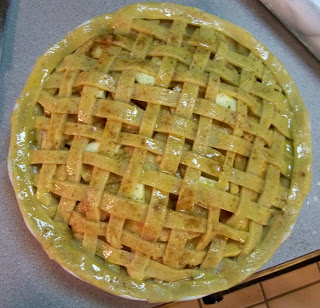 How pretty does that look? I honestly think a big reason I started this blog is so I finally have a place to put the pictures of the food I cook... The smell of this pie baking on the first official Saturday of fall was heavenly (oh no! I just revealed that this post took a while to post!). I just wish I had thought ahead and gotten some vanilla bean ice cream to go with it. 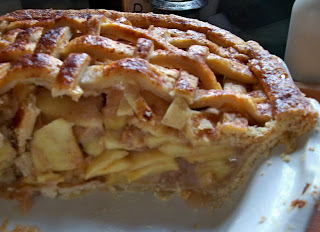 The apple slices were tossed with a mixture of sugar, flour, ground cloves and cinnamon. I can't remember the exact recipe I used and I really wish I could. Although I have the perfect pie crust dialed in now, often when I bake pie the filling is rather soupish. Delicious, yes, but in my mind a pie when cut should for the most part hold it's shape. Which is what this pie did! I was so excited I took a picture of the cross-section. Hopefully I can find this Goldilocks recipe balance again the next time I make pie. Sometimes being an impulsive cook has it's drawbacks. Magic is hard to recreate.

P.S. It was delicious. Apples that go from tree to finished pie in less that 2 hours is pretty spectacular.
Posted by Stephanie/Sproffee at 3:00 pm 3 comments: 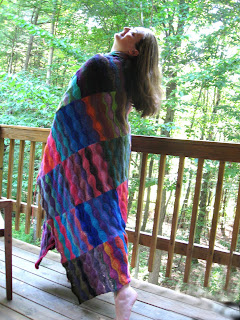 While I was in China, I knitted a wonderful and meaningful blanket for myself with tons of Noro Kureyon yarn that was given to me by many friends and family members. (Pictured on the left. Ignore the goofiness.) Each square represents a loved one, and together the blanket can remind me of my time in Shanghai. I was planning on making maybe a 24-ish square blanket, but I ended up receiving over 70 skeins! I got so much yarn that even when my blanket was done (with 42 squares), I had tons leftover. So I am using that leftover yarn and keeping the love alive by making a different style blanket for my parents. I plan on giving it to them for their wedding anniversary at the end of this year. They have already seen me working on it, so it's not much of a surprise... 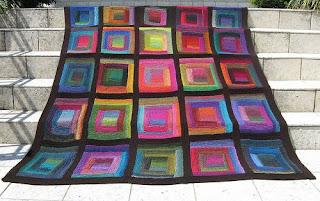 When trying to find a good pattern, I found the Paintbox afghan on Ravelry and simply fell in love. The picture on the right is what really sold it for me. (Note: I did NOT knit this). I love working with transitional yarns, and I think this is the perfect pattern to highlight the lovely qualities of the Noro yarn. Each square is knitted from the inside out and the final effect is supposed to seem like a painters box of swirled paints, hence the name. The pattern for the squares is also known as "Log Cabin" because the overlaying structure is similar to building a log house.

Through using full skeins and also fudging some transitions by putting together scraps leftover from the other blanket, I managed to knit up 36 squares. I plan on putting together a lovely 6x6 blanket. The sample above is 5x5, but I am hoping to end up with something roughly queen-sized. 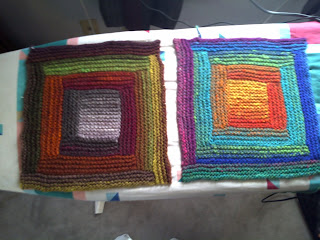 Since all the knitting is done, the next step was blocking. Blocking involves taking knitted work of natural fibers and by using heat/steam/agitation/etc, to get it to take the final shape you want. Even though each square I knitted was made with the same yarn and knit with the same pattern, by differences in the tension of my knitting, the thickness of the fibers in the yarn and the alignment of the planets, not every square is the same size. By stretching the squares, pinning them down and giving them a bit of a steam/ironing combo, I can get them the size and shape I want. I aimed to get them all to somewhere between 10.5-11 inches square. 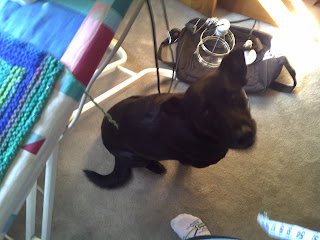 It's a long and rather dull process that I haven't done much in the past, but after it made sewing together the last blanket about 1,000% easier, I have been converted. And it wasn't too lonely. Since it was extremely windy out that day and my dog, Ben, is a big baby when it comes to howling wind, I had company. I just wish he hadn't decided to cower DIRECTLY UNDERNEATH the ironing board. Ah well.

Next I just have to decide the blanket layout. Whee!
Posted by Stephanie/Sproffee at 2:04 pm 1 comment:

I think this might just be my new favorite burger recipe. A few weeks ago, my mom gave me the mission of finding a new and interesting burger recipe. When I found a recipe that contained both feta cheese and pesto (both loved and oft used in this house), I knew I had stumbled upon a winner. I made them for the first time up at the NY cabin and it was a crowd pleaser. 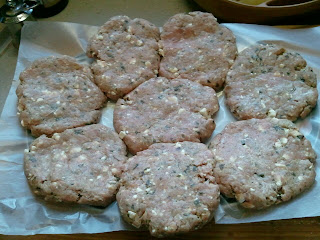 
Today there was a bunch of feta in the fridge and a bit of pesto leftover from an earlier batch. Homemade pesto, I might add, made with basil from my mother's garden and toasted almonds instead of the usual pine nuts. I didn't feel like chopping garlic (for probably the first time ever), so instead of using seasoned salt, I used garlic salt. I also tossed in some extra feta, some dried oregano, and a dash of this dried onion mix goodness that resides in the spice cabinet.

Tasty and simple. A real winner twice over now.
Posted by Stephanie/Sproffee at 8:03 pm No comments:

Hooked On Hobbies: Day One

After the surprising continued success of my China blogs, I figured I would try to keep the fire alive and start a non-China blog.

It took me all of about five minutes to realize that this blog, no matter where it started, would most likely end up being about the ridiculous amount of hobbies I have that spans from cooking and knitting to sword-fighting and improv comedy. Finding a good title was the actual hard part.

All the titles I thought of, from "Serial Hobbyist" to "One Too Many Hobbies" and everything in between was taken. So I ended up on Hooked on Hobbies. I hope all of you out there in blogland like it.

Here's the first post of hopefully many to come.

-S
Posted by Stephanie/Sproffee at 1:04 am No comments: