This past weekend was one of the best of my life. I served as a bridesmaid for the wedding of two of my good friends from college, Rose and Jesse. Most of the wedding party were friends of mine from college, as was the photographer and even the officiant. I got to help my good friends, attend an amazing and gorgeous wedding, sit at the "best table" (according to the DJ) with even more friends of mine, wear a lovely dress, dance and sing all night, and generally have a fantastic time. 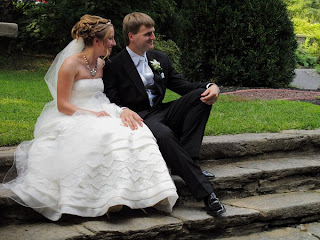 (Photo of the happy couple. Credit to Cesar Caro)

The only downside really was that it all had to end. But hopefully my wedding present to the couple is something that will be around for a while. I met Jesse and Rose through "That Medieval Thing", a medieval reenactment club we were all part of in college. Rose and I actually became friends through becoming co-chairs of the club together (we didn't really like each other before that...something we constantly joke about). Every year for the medieval festival the club put on in the spring, the club would make t-shirts with a design representing the plot. Our sophmore year the club also started putting quotes on the back of the shirts. To the club members its a nice sort of memorabilia. I can't remember exactly when the idea crossed my mind, but soon after they got engaged, I knew I wanted to turn those t-shirts into a quilt as a wedding present for them. 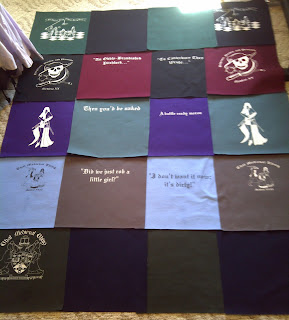 Getting the shirts was relatively easy. We always had a few extras so I called up my friend Katelyn who was running TMT at the time and through her got my hands on most of the shirts I was going to need. Unfortunately the leftover shirts from our senior year Medfest were too small to use, and since Rose actually designed that year's shirt I couldn't leave it out, so I had to sacrifice my own. Totally worth it in my opinion though. From top to bottom are the shirts from freshman to senior year. The bottommost row is the club's coat of arms and then a blank blue shirt (our college colors are green and blue) on which I wrote their names and the date of the wedding on the bottom right square with a silver fabric pen.
I labored over ever little decision on this quilt especially what material to use as the borders between squares. I wanted something that wouldn't clash with all the colors, and was happy when I found a nice black with just a bit of silver/gray detail to it.

This was not only my first ever attempt at making a quilt, but also my first ever attempt at using a sewing machine. And after getting a quick lesson from my mother I have no idea why I put it off so long. Its so efficient!
I backed each shirt with an iron on fusible fabric so they wouldn't stretch, figured out the biggest possible square I could make from each one, measured roughly 800 times, then took a deep breath and cut the squares. After that I sewed them into strips and then sewed the strips together. Once that was done I put the same material around as a border. 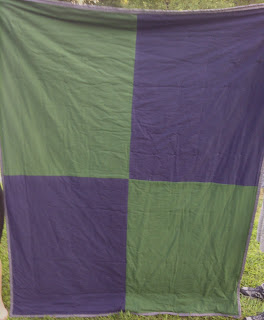 The backing was another thing I labored over. Every time I went to the craft stores to get supplies for the quilt I visited the fleece section to see if I could find a nice patterned fleece to use, but nothing spoke to me. In the end I decided to just get more green and blue. It ended up looking somewhat like the giant banner we used in the club for events, so yay for that!
Instead of traditional quilting I went with hand tying. I figured I was already trying to do about 3 new skills at once, I might as well take it easy on myself. I layered the fleece backing, the cotton batting and the quilt top like a big sandwich on top of two tables I pushed together in the living room, taping down each layer as I went to make sure nothing moved. Then put literally every safety pin I own into the thing to make sure it didn't move. I marked with chalk where every tie should be (about 5.5" apart) and then went to it with a curved needle and some silver/gray embroidery floss. It left me with a sore back, but it was really coming together. 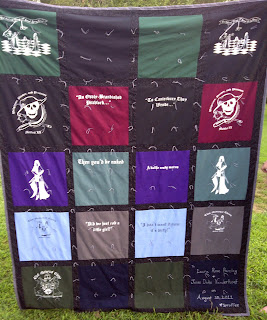 After trimming the excess backing and batting, I cut long strips of a silver/gray material for the binding and ironed the strips in half and then folded the raw edges in and ironed again. That way, once I wrapped and pinned the binding around the edges of the quilt I only had to go over it with the sewing machine once and there were no edges left. I took out all the pins, hand sewed the corners and binding ends to make sure everything was secure, trimmed my hand ties to the same length and then took a step back.
(Click the image to see it bigger/with more details)
I am really pleased with how this came out. Every step of the way I felt like I had no idea what I was doing, but somehow it all came together into something wonderful. I suppose I could make some cheesy parallel here with how that can describe love, but I shall resist.


I hope that Rose and Jesse can enjoy this quilt for a long time. More importantly, I hope they have a beautiful life together. If their wedding is any clue to how their marriage will be, then it will be gorgeous, geeky, full of love, friendship and silliness...and altogether wonderful.

All my love to you both!
Sproffee

Posted by Stephanie/Sproffee at 9:51 am 2 comments:

People were asking me this weekend for my quiche recipe, but since I don't usually use recipes it was kind of hard to answer. But here I'm going to type up my basic method and then a more detailed version of what I did Saturday and hopefully that will help!

The basic method I follow is cook up whatever veggies/meat/deliciousness I want in my quiche until it is cooked well enough to just eat on its own, toss it with whatever cheese I want and about half fill a frozen pastry crust with it. I beat together eggs, milk, salt, pepper (sometimes other stuff like onion/garlic salt or oregano) and sometimes additional cheese and pour it over the "stuffs" to just about fill up the rest of the crust (keep in mind the eggs expand), and cook in a 350F oven until the center is set (about 35-45 minutes).

Have fun mixing and matching your fillings. Below I typed up the quiche I made this weekend with the most "stuffs", but the other one just had steamed broccoli with a bit o' garlic and a ton of cheddar cheese. 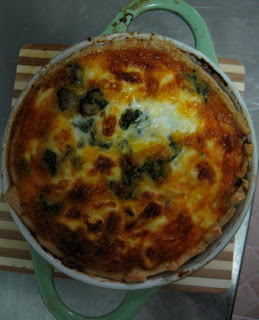 Onion, maybe a half or less depending on how much you want, cut into long thin strips

Mushrooms, about a cup, chopped into about 1/2" pieces

Sausage, 3-4 links or patties, fully cooked and chopped up

Eggs, 3-4 depending on how much stuff/how deep your crust is

Milk, about a half cup

Cook the onions in the butter over low heat for a while until they start getting really soft (you want them to end up caramelized or near enough by the time your whole veggie mixture is done). Add the garlic and cook a bit longer. Toss the mushrooms in and cook a bit more. Everything should be getting slightly golden/brown and soft. Toss the baby spinach in and cook just long enough to wilt it/coat it with butter. Note: I usually end up constantly adding butter in small bits to make sure it gets on everything. You don't want the food to burn but you don't want it to be swimming in butter either.When it looks good and cooked, remove from heat.

Toss your cooked veggie mixture with the chopped up sausage and feta and put it on the bottom of your pastry shell, or if you are going the crustless route, on the bottom of a greased pie dish. You want the filling stuff to about half fill your dish, if you have more than that it might not hold together with the egg, if you have too little it won't be overbrimming with delicious stuffs.

Beat your eggs and milk together with salt/pepper/any additional seasonings you want (I put in a little oregano on Saturday). Pour over the stuffs until your crust/dish is just about full. Sprinkle some cheddar over the top.

Pop the whole shebang in the middle of your oven and cook until the center is set (when you wiggle it, the center doesn't look liquidy). About 35-45 minutes.

Posted by Stephanie/Sproffee at 10:27 am No comments: