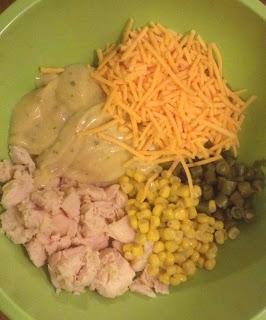 About a month or so ago, I was considering what I wanted to bring to a party and trying to find an interesting recipe to use. While I was looking, I found THIS page and the recipe it contained. The pictures looked so cute, the descriptions sounded so interesting, and the recipe itself sounded DELICIOUS. It wasn't a good recipe for the party I was going to (I was looking for something that didn't need to be warmed and had smaller servings) but I bookmarked the recipe knowing that without a doubt I was going to make it someday.


Someday came pretty soon. I was visiting my friend Jess this weekend (she's the one I went to karaoke with Friday night). I told her before I came to visit that I had 2 things I really wanted to do this weekend: 1) I wanted to go running so I could keep up my 40 mile challenge and 2) I wanted to cook something since I hadn't in a while. We completed our run this morning despite some initial reluctance from Jess, and last night we cooked. 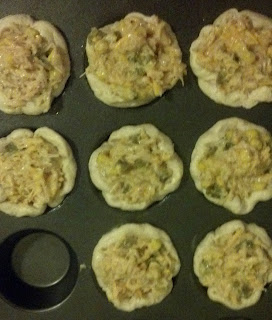 I tend to be terrible at making decisions, so when it came time to pick what to cook, I was checking out allrecipes.com and eatingwell.com trying to get inspired. Then out of no where I remembered the chicken pot pie cupcake recipe. It looked easy and tasty enough to fit the mood of our hanging out (SPOILER: They were.)


We headed to the store to get the ingredients. Because I am my father's daughter, I bought way too many ingredients (we used half of what I bought and we still had leftovers). There was also an amusing moment when I said we could just get some canned chicken to give ourselves a shortcut and Jess had a hard time believing that canned chicken was a thing. I was determined to find some to show her it was real. Her reaction when I finally found it was rather mellow. ......CANNED CHICKEN!

I tried to put the ingredients in the bowl similar to the picture on the website I got the recipe from, but my picture does not look as delicious, I feel. Instead of frozen veggies we used some canned greens beans (which I chopped up into smaller pieces) and corn since that's what Jess had. While I made the filling, Jess sprayed the cupcake tin and made the dough cups out of the biscuit dough. With one can of chicken, one can of soup, and the veggies/cheese/spices, we had enough to fill all 8 biscuit dough cups (one biscuit per) and had some filling left over. Not sure what Jess is going to do with it. (Jess, if you are reading this, maybe heat it up and put it over some rice? I bet that would work). 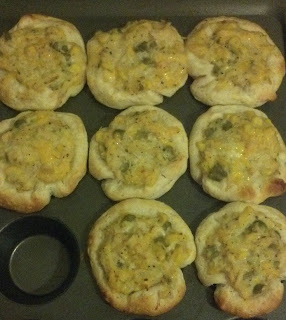 We cooked the cupcakes for about 17 minutes, longer than the website suggests, but I did turn down the heat a bit since the edges seemed like they were getting dark fast. The cupcakes smelled super tasty.

I loved these things. I may be biased, though, because this recipe is basically all my favorite things. I love chicken and cheese and creamy soups as well as anything warm and bready. They were comforting and warm and tasty and they were ridiculously fast and easy to make. The only downside might have been that the biscuit dough part does not reheat too well, and gets a bit chewy. These might need to get reheated in the oven if you have leftovers, or only bake as many as you think you'll eat in one sitting. I bet this will be a great recipe to make some variations on, such as using cream of mushroom soup or trying to make a beef variety. One thing for sure is that I will definitely make these again.