Saturday afternoon, Jessica and I went for a hike at Eagle Rock Reservation in West Orange, NJ. Although by "hike" I mostly mean "a nice walk in the woods". The paths were largely clear and easy. The air was cold and crisp...perfect sweatshirt weather. 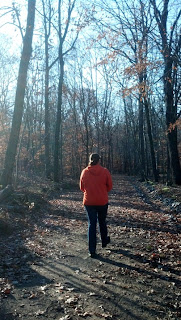 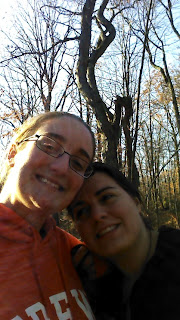 We wandered and talked and shared stories of high school misadventures and relationships and life and work and everything. We paid no attention to the fact that neither of us really knew where we were going, we just enjoyed the scenery with no destination in mind. Whenever we got to a fork in the path one of us would just decide which way looked more interesting and say "Lets go this way" and we would. Normally I think I would have been a little more anxious about what paths we were taking and keeping track of where we were. I decided to not over think things like I usually do, but instead just walk.

Because of hurricane Sandy, there were a lot of downed trees in the woods. At least, I assume that's why there were so many downed trees. Being that its a public park and a lot of the trees blocked the path completely at points, something I assume would be maintain. The blocked paths lead to a few step overs, a few walk arounds and one hesitant crouch under (after testing the stability of the tree with the old fashioned "lets push against it real hard and see if it shifts"). 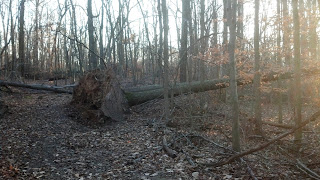 As it started getting later and darker, we started making choices that we hoped were pointing us back to where we started. We tried to make smart decisions based on the location of the sun compared to where we remembered the entrance being. We aimed for high ground to try and see far ahead and get a sense of our location, but it wasn't really working. 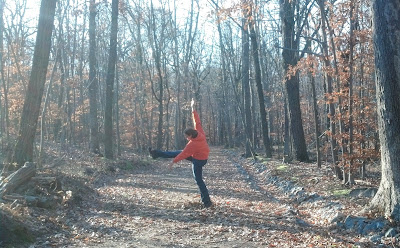 After a while of doubling back and more wandering, we happened to run into an older couple with their dog. Turns out the husband had walked these trails many times, and had gotten lost in them before himself. They were kind enough to walk with us for a while and swap stories. Before we knew it, they had led us to the right path and soon we were quite literally out of the woods. We made it back to the car just as the sun was setting. 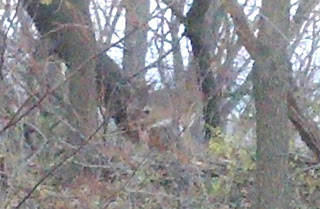 Although I thought nothing of it at the time and even now it seems like a bit of an overly artistic tint to put on our fun day, but our hike through the woods was a little like life.You start off not really caring what path you are on, just enjoying the view. Sometimes your path will be blocked and you'll need to find a way around it. And at some point, most people have a destination or goal in mind, and it helps to have someone who has already walked the path there to show you the way. No matter what, you just hope to get there before your sun sets.
Posted by Stephanie/Sproffee at 9:44 pm