About a month ago, I went to the Big E with my mother. As we were walking from where we had parked to the event, I saw a huge billboard with "Fiber Fest" on it. I immediately got VERY EXCITED and called my friend Bonnie (who taught me how to knit and shares my love of crafts). I left her a message saying that on the weekend of November 6-7th, we were going to go to Fiber Fest. No questions asked. 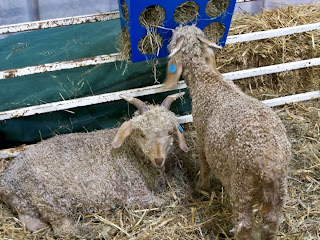 There were a bunch of animals there, including sheep, angora rabbits, alpacas and angora goats (pictured left). The first thing Bonnie and I did upon entering was head right to the fiber section. Fiber is better known to non-knitters as animal hair. Wool, mohair, angora, etc. We walked through the rows filled with bags of different kinds of fiber, completely raw and often still with bits of dirt and straw mixed in, brushing our fingers on each kind and dreaming what lovely yarns it could be turned into. I couldn't really help myself and got a bag of beautifully curly Lincoln sheep fiber. 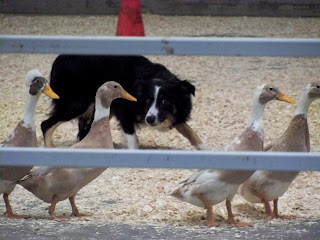 Right after, there was going to be a sheepdog demonstration, which we didn't want to miss. The area was a little small so instead of herding sheep, the dog was herding ducks. It was a very cool demonstration. You could see the intelligence and focus in the dog, and she moved very fluidly. The kid in me was excited because the woman who was working with the dog said "Away to me", which made me think of the movie "Babe". Apparently in sheepdog lingo it means to go to the right of the herd. "Come by" means to go to the left. 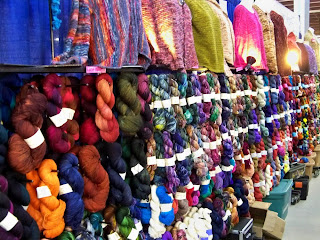 After that we walked around the whole event twice. Some areas about three times. It wasn't a small event, we just wanted to make sure we saw everything! There was a wonderful sense of camaraderie. Everyone there was a craft nut. There were spinning wheels everywhere, people using drop spindles while they perused the vendors, and everyone was decked out in lovely hand knits. Everything was so unbelievably beautiful, especially because you knew that everything there was handmade with great care and love. I probably said "SO PRETTY!" about a thousand times. 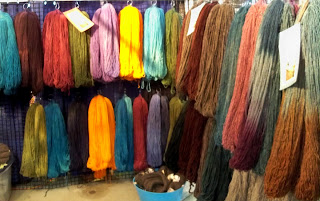 Bonnie was interested in learning how to spin yarn with a drop spindle (which I will talk more about in another entry soon), and really she picked the perfect place to start. A man was stopping random people and teaching them how to spin and ply yarn. Another vendor gave her some advice on how to get started and keep up the spinning habit. Shortly afterward a few women gave her advice on what kind of spindle to start with. Then she found a gorgeous spindle, and some lovely alpaca roving.

Everyone there was wonderful. Friendly, helpful and just as excited about yarn and fiber as Bonnie and I. I was in awe of some of the stuff that people were making, like this man working on a giant loom and this woman's lacework (which gave me a headache just looking at it). 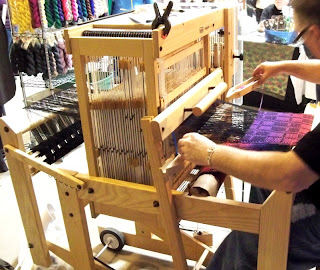 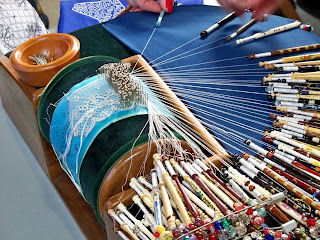 Being there renewed my craft mojo quite a bit. I wanted to learn about 12 new things after being there for five minutes. My second and third most used phrases at the event after "SO PRETTY" were "I WANT A SPINNING WHEEL" and "I WANT A LOOM." Ah well. Someday.

I am excited about what I did come home with, and it took considerable effort to tone it down to just this. At left you can see my bag of fiber, in the middle is some wool batting that is processed and dyed and ready for spinning, and finally a skein of stunning hand-painted yarn. I joked that I got the three stages of yarn: raw fiber, processed materials and finished yarn. 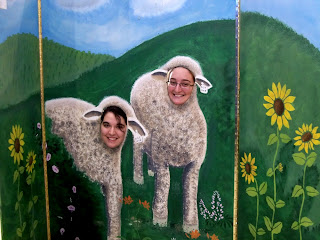 Judging from the website about the event, and also from talking to some of the volunteers, it sounds like this will hopefully be the first of a new yearly event. Parking was $5 and the event itself was $5 so it certainly didn't break the bank to get in. I thought it was well organized and I had fun just looking at everything without even going to any of the workshops they offered (including intarsia, felting and rug making). I sincerely hope that they do decide to make this a yearly event. If so, I know for sure that they will have at least two visitors!
Posted by Stephanie/Sproffee at 8:36 am